Monastery of Sant’Anna in Camprena – The English patient

Let’s discover the Sienese places that have inspired so many masterpieces of the seventh art, starting from Podere Salicotto

Lovers of cinema and Tuscany? Then this article is for you!

How many times in front of the screen have you wondered where those fantastic places were or did you think “Hey … but here it looks so much like that area around Siena!”

Yes, you were probably right because there are so many Sienese film locations used that have contributed to making some masterpieces of the seventh art truly immortal.

Over the years, both Italian and foreign directors have celebrated these wonderful lands, and now you can see these breathtaking views with your own eyes! If you are passionate about cinema and are curious to see immortal places live, we are waiting for you at Podere Salicotto, our farmhouse in the heart of the Crete Senesi to immerse yourself in a tour of these lands dedicated to film tourism!

In Val d’Orcia, the great English and Hollywood films

9 Oscar awards in 1996 made the English Patient a cult. A poignant film that made the protagonist Ralph Fiennes, who plays the English patient in the wonderful Monastery of Sant’Anna in Camprena, near Pienza, even more celebrated. Click HERE  to find out more about Pienza, the eternal city.

If you don’t know this wonderful village, you should definitely visit it. You will find super romantic streets and views, Renaissance palaces and churches, a panoramic view of the entire Val d’Orcia and finally the exquisite Pecorino di Pienza awaiting you. Many scenes were shot between the Pientino village and Montepulciano, another Renaissance village of incredible beauty where you can taste one of the most famous wines in the world: the Vino Nobile di Montepulciano. Here many scenes of the TV series I Medici were shot. To find out more about the village of Montepulciano click HERE. 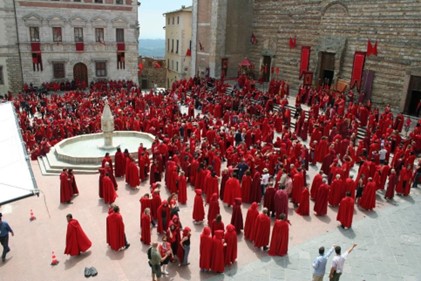 Do you have a thing for vampires? Then surely you can’t not visit Piazza Grande in Montepulciano where some scenes of New Moon – The Twilight saga were shot and relive the same emotions felt in the film. In Michael Hoffmann’s A Midsummer Night’s Dream (1999) you can admire another wonderful panorama of the Val d’Orcia and Pienza, while in Under the Tuscan Sun, another American film, you can recognize the famous curves of Monticchiello and the beautiful Cortona, an Arezzo village of exquisite beauty.

Also in Pienza, one of the great masters of world cinema Franco Zeffirelli directed Romeo and Juliet: some scenes were shot in the courtyard of Palazzo Piccolomini and many others are divided between Piazza Pio II and Corso Rossellino. Also the 1971 work on the life of St. Francis of Assisi Brother sun sister moon was shot in Val d’Orcia and at the iconic Abbey of Sant’Antimo which we have already talked about HERE.

Our tour continues near Radicofani, another city rich in history and charm, linked to the figure of Ghino di Tacco, a medieval Tuscan Robin Hood we are talking about HERE. The last part of Marco Tullio Giordana’s The Best of Youth and Sergio Castellitto’s The Beauty of the Ass was shot right near Contignano (a hamlet of Radicofani); finally, the Taviani brothers also chose the Val d’Orcia for their marvelous film Boccaccio.

Let’s totally change genre and move on to Italian comedy with the films 2061, An Exceptional Year by Carlo Vanzina and My life with Stars and Stripes by Massimo Ceccherini, again between Pienza and San Quirico d’Orcia, another picturesque village not to be missed.

Nostalghia by Andreij Tarkovskij was shot between the famous Abbey of San Galgano and the thermal waters of the iconic Bagno Vignoni bath, the thermal pearl of the Val d’Orcia. Two unique places of their kind: the first is a suggestive open-air abbey, where you can find an authentic sword in the stone. While Bagno Vignoni is one of the most evocative places in these lands: a spa village with an iconic rectangular bath in the center of the square will offer you breathtaking views … and relaxation in the many spas.

We talked about it HERE and HERE.

The Val d’Orcia in the collective imagination: the Elysian fields by Massimo Decimo Meridio

Scrolling through these films you may have thought: “Ok, but when are we going to talk about Gladiator?” Yes, because if there is a film that more than any other celebrated these lands, making them known to the great world audience, it is Ridley Scott’s Gladiator (2000). For those who do not know then we will tell you here: the famous Elysian fields of Massimo Decimo Meridio (Russell Crowe) are located here, between San Quirico d’Orcia and Pienza. Remember the famous scenes where the gladiator caresses the ripe wheat and remembers his loved ones brutally murdered? The house is located in San Quirico d’Orcia and the Elysian fields with the iconic dirt road can be found from the Pieve di Corsignano in Pienza! 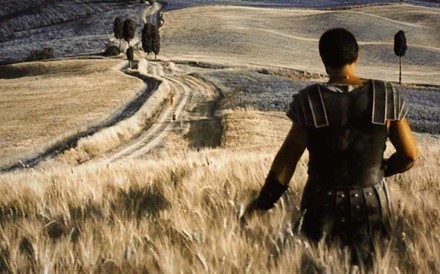 What do a film from the 007 Saga about James Bond, a historical film about the Marzabotto massacre and the films Pollution by Luigi Lo Cascio and Cavalli by Michele Rho have in common? Simple, they were shot in and around Siena. In The Man Who Will Come by Giorgio Rights, the massacre of Marzabotto is narrated, and you will be able to recognize some locations in Sovicille, while in 007 – Quantum of Solace with Daniel Craig you cannot fail to recognize the scenes full of special effects in Siena and its Piazza del Campo prepared for the Palio di Siena. Even Bollywood has chosen Monteriggioni for a musical scene from the Indian film Rajapattai.

If you are true cinephiles then you cannot fail to come to the Podere Salicotto farmhouse, where you will be in the perfect position to visit both the Val d’Orcia and Siena and its treasures. Discover our farmhouse in the most unspoiled nature and let yourself be tempted by our personalized tours, from our salt water swimming pool overlooking the wonderful nature of the Crete Senesi, all to be discovered. Our cooking classes with Silvia await you and treat yourself to an aperitif at sunset by choosing one of the wines from our cellar which is always open and available for guests. Relax by looking at your photos on film locations and enjoy the most authentic Tuscany … We will take care of the rest!

We are waiting for you at Podere Salicotto, discover our offers HERE