Panzanella is a typical Tuscan recipe, a rustic and summer recipe. Panzanella is a poor man’s dish of the Tuscan country tradition, very simple to prepare.
No need for cooking, farmers used to eat it in the fields, during summer work when they remained outside all day. The idea of ​​this tasty recipe comes from the need to recover stale bread that otherwise would have gone to waste.
Here at Podere Salicotto, during the summer, we always prepare panzanella and many other traditional Tuscan dishes that you can learn to cook during our cooking classes.
To prepare this fresh and summer-flavored recipe we need stale bread (preferably Tuscan bread, without salt), tomatoes, cucumbers, onion, basil, oil, vinegar, salt and pepper.

Here’s how to prepare the Tuscan panzanella recipe.

First of all, take the stale bread and remove the crust. Cut the crumb into pieces. Soak it in a solution of water with a little vinegar for about twenty minutes.
Meanwhile, wash the tomatoes and cucumbers and cut them into pieces of about 2 centimeters. At this point cut the onion rather thin. After the twenty minutes, squeeze the bread well, put it in a large bowl and begin to dress it. First add the oil. Do not be shy, this is a poor man’s dish, do not save on oil. Then add a little vinegar. Vinegar is very important for a good panzanella. But be careful, not too much. Let’s taste. At this point continue with salt and pepper.Add onion, tomatoes, cucumbers and plenty of basil and taste it again. If you think it necessary, add more salt and oil to the vinegar. Your panzanella is now ready!

The Podere Salicotto organizes courses in traditional Tuscan cooking, where you can plunge your hands into dough and have fun learning the authentic recipes of our tradition.

Find out more about our Tuscan cooking lessons 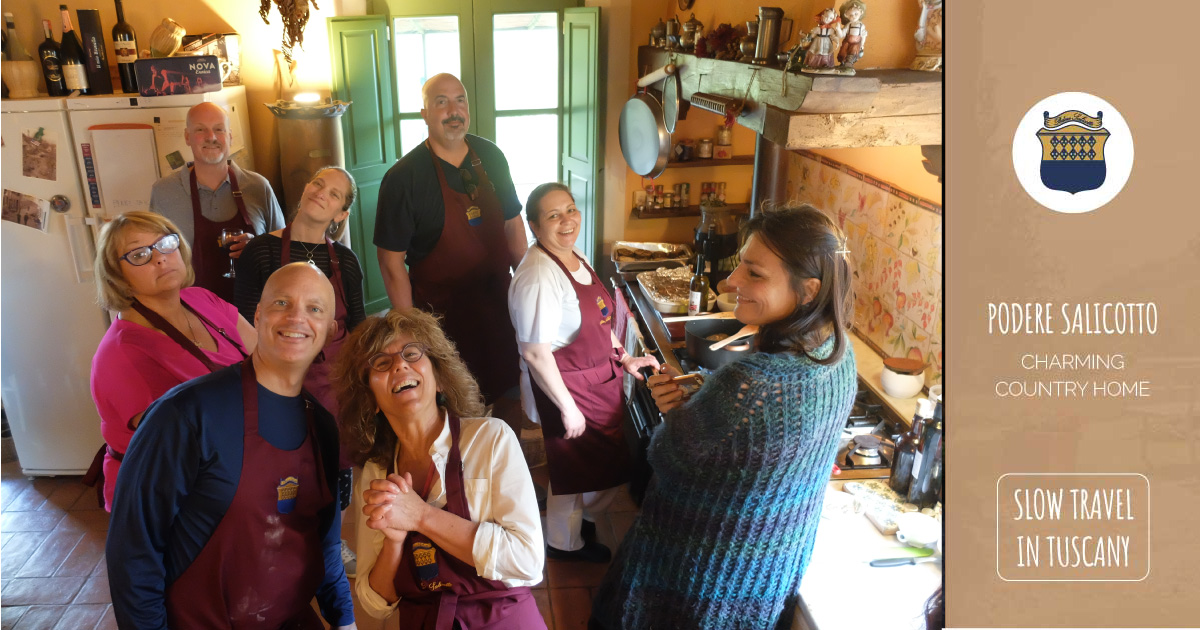