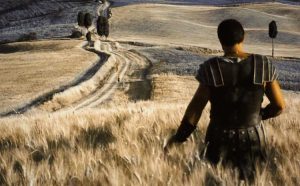 How many times, visiting a place of extraordinary beauty, have you said “have I seen this in a film”? Siena territory and the Val d’Orcia in particular, have often been the harmonious and beautiful location of important films known throughout the world.

The amazing thing is that these lands have been appreciated by directors and screenwriters, not only within the italian borders, but also in Hollywood, becoming the setting of world-famous films that have received Oscars and other important awards.

Are you curious to know which movies were filmed here? Do you want to visit the places of your favorite movies? Follow us in this small and evocative tour in search of cinema locations!

If you have not yet seen some of these films you should do so, but be careful,  it could cause an uncontrollable desire to come to Tuscany and search out that wonderful location!

We start with a really great movie, “The English Patient”. A story of love, war and espionage that is articulated by intertwining the present with flashbacks. Here the English Patient was located in the wonderful monastery of Sant’Anna in Camprena and many scenes are filmed between Montepulciano and Pienza. For a film awarded with 9 Academy Awards in 1996, a wonderful location that is well worth visiting!

Another big movie that brought attention to the Val d’Orcia is “The Gladiator” by Ridley Scott.
The two emblematic scenes of the film shot here are that of the Gladiator’s house which we find in the dramatic episode of the murder of his wife and son and that of the famous finale in which the gladiator caresses the ripe wheat in the Elysian Fields. Both these places are easily accessible: the house is located at the entrance to San Quirico d’Orcia and is the Manzuoli Farm, while the Elysian Fields are located right under Pienza in the dirt road that from Pieve di Corsignano descends towards the countryside!

Another great movie that has been filmed here is obviously “Under the Tuscan Sun”. The main location of the film is the marvelous village of Cortona, but many scenes took place in Montepulciano, in Pienza and in the surrounding countryside.

Andrej Tarkovskij elected Bagno Vignoni as a set for his suggestive Nostalgia.

Now let’s move on to a true master of world cinema: Franco Zeffirelli. Zeffirelli has set many of his cult films in the Val d’Orcia. For example “Romeo e Giulietta” was shot in 1968 in Pienza. The party in which the two young people meet each other is held in the courtyard of Palazzo Piccolomini and many other scenes are divided between Piazza Pio II and Corso Rossellino. Also “Brother Sun Sister Moon” of 1971 was filmed in Pienza. In this film dedicated to San Francesco there are numerous scenes in which the Val d’Orcia and the Sant’Antimo Abbey are the protagonists.

Remaining within the realms of intellectual cinema, the Taviani brothers also chose the hills of the Val d’Orcia as the setting for their 2015 film “Meraviglioso Boccaccio”

But the Val d’Orcia was also chosen by Carlo Vanzina and Massimo Ceccherini who decided to shoot their own comedies here “2061, an exceptional year” and “My life with stars and stripes”.

In addition, the last part of the film “The best of youth” of 2003, with the family that buys and restructures a farm is filmed between these hills, Torre Tarugi is clearly visible, between Contignano and La Foce, as well as the roads and views towards the Mount Amiata.

Have you never wanted to see and experience these places you only saw on the big screen? You just have to put on comfortable shoes, organize your tour and visit this wonderful land of leading actors.