If you are travelling among the rolling hills of the Val d’Orcia and you are looking for a picturesque village to visit, we suggest San Quirico d’Orcia. An ancient village in a strategic and fantastic position, in the most poetic part of the Val d’Orcia.
San Quirico d’Orcia is one of the must-see places once you arrive in this land of enchantment. Here you will find many hidden treasures, excellent local cuisine and a magical atmosphere.
Even the surroundings of San Quirico d’Orcia are really beautiful, some of the most symbolic spots of this land, immortalized in the most famous postcards, are located a few kilometers from this village. One above all, is the picturesque thermal town of Bagno Vignoni.
Let’s start the discovery of San Quirico d’Orcia, about 17 kilometers from our farmhouse Podere Salicotto.

WHAT TO SEE IN SAN QUIRICO D’ORCIA

The center of the village is very picturesque with its paved streets, beautiful stone fountains, fortresses and medieval churches.
San Quirico was an important stop along the Via Francigena. From here starts one of the hardest stages of the whole path that leads to Radicofani.
The village still boats its original medieval structure, surrounded by the ancient city walls, still intact and well preserved with its 14 towers and turrets. The main street divides the village and houses restaurants and shops.
But what to visit in San Quirico? Here are our tips on what to see in San Quirico d’Orcia. 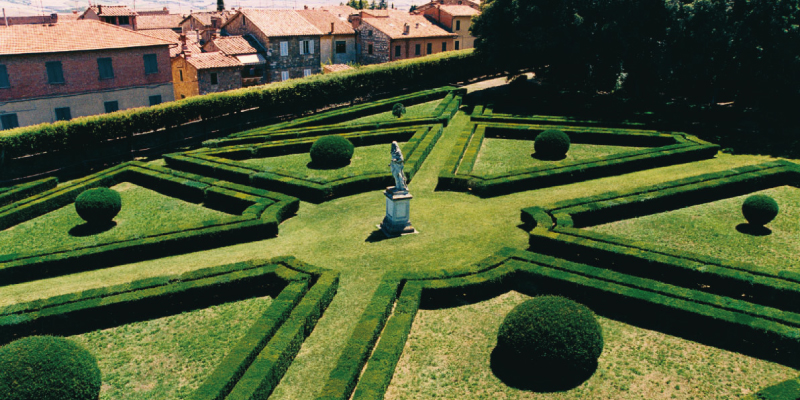 Let’s start with one of the most beautiful treasures of San Quirico: the Horti Leonini. A typical sixteenth century italian garden. The entrance is in between the city walls and the main square of the village. The “Horti” takes their name from their first owner, Diomede Leoni, and still maintains their original structure today.
The garden is divided into two parts. The lower area, has a  rhombus shape. It’s composed by triangular flowerbeds and is surrounded by walls and holm oaks. At the center stands the statue of Cosimo III dei Medici.
A long path divides the garden and leads to the upper area, a grassy square in the middle of a centuries-old holm oak forest.
In the highest part of the Horti Leonini you can visit the remains of the ancient Cassero tower, which was about 40 meters high, today almost completely destroyed.
Horti Leonini is a magical place to walk slowly and go back in time. 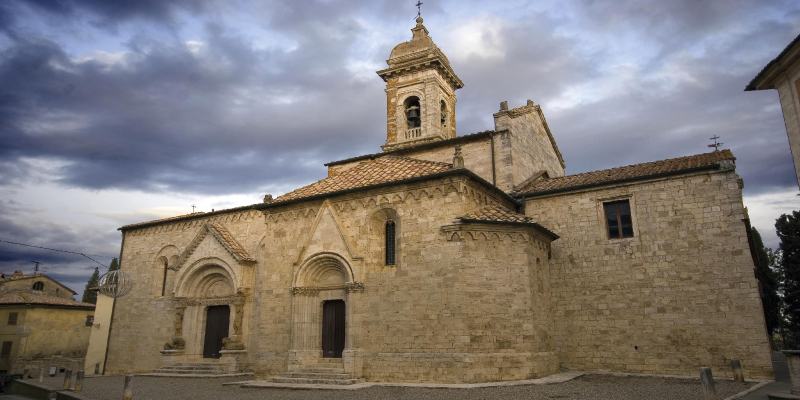 Another beauty not to be missed is the Collegiata church. A Romanesque building dating back to the 8th century. This beautiful church opens to the outside through three portals, one of which is characterized by beautiful decorations, looking towards Siena.
Inside there’s an altarpiece painted by Sano di Petra, a painter from the 15th century Sienese school.
Another beautiful church to visit is the Church of San Francesco, commonly called “della Madonna”. 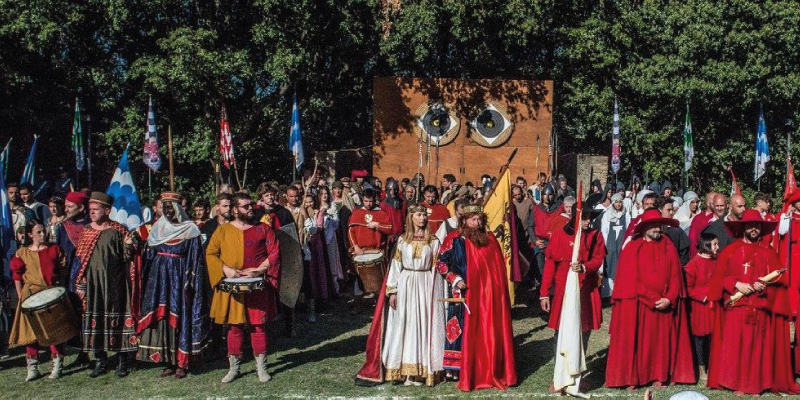 Every year in San Quirico d’Orcia in June there is the Barbarossa Festival. A dip between history and passion where the Middle Ages are relived with the return of Emperor Federico Barbarossa. In this characteristic historical re-enactment we remember the meeting between the emperor and the papacy that changed history. Emotions and flavors to experience, that culminate with the contests between flags bearers and archers among the city districts in the splendid setting of the Horti Leonini. 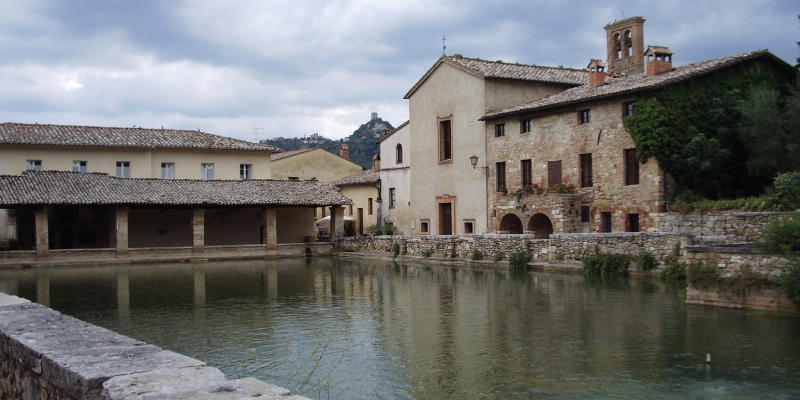 If you are in San Quirico d’Orcia you cannot miss Bagno Vignoni, a real jewel of the Val d’Orcia. This small and suggestive village is situated around a large pool of thermal waters which replaces the square. The beneficial thermal waters of Bagno Vignoni have been famous since ancient times thanks to their proximity to the Via Francigena, Popes; saints and knights immersed themselves in these waters. Today there are three spas where you can enjoy moments of complete relaxation and spa treatments, they are: Adler Thermae, Albergo le Terme and Hotel Posta Marcucci. At sunset the vapors of the thermal waters rise. Bagno Vignoni is a very romantic place, ideal for a candlelit dinner. 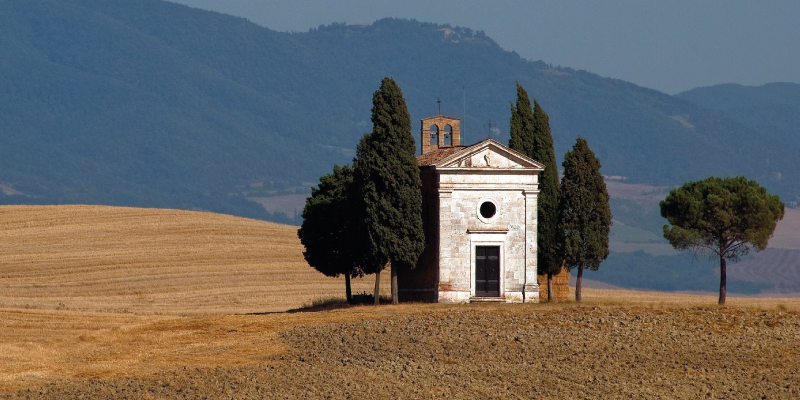 In the surroundings of San Quirico you can find another jewel of the Val d’Orcia. Surely you have almost certainly seen it in a postcard … it is the Chapel of Vitaleta. This small church framed by cypress trees is one of the most photographed places in the whole Val d’Orcia. A magical place where you can breathe quiet and serenity. It is located between Pienza and San Quirico d’Orcia along the Provincial Road 146 of Chianciano. To reach it you have to walk a bit, but it is definitely worth it. 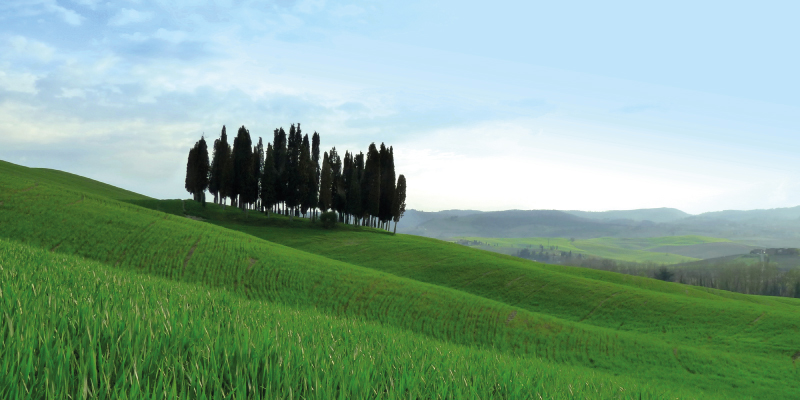 THE CYPRESS TREES OF SAN QUIRICO

Another of the most famous and photographed places in the Val d’Orcia is near San Quirico. If you pass along the Via Cassia towards Torrenieri it will be hard to resist the temptation to stop to photograph the characteristic group of cypress trees.