Buonconvento is one of the most beautiful villages in Italy although little known. A place where the medieval atmosphere has remained intact. A charming historic center surrounded by fourteenth-century walls straddling the Crete Senesi and Val d’Orcia.
Imagine a traveler from the Middle Ages who came from Siena to Montalcino. After about 25 kilometers of walking, after crossing the hills and valleys of the Crete Senesi, he saw the compact block of the village walls appear in his path. It was certainly an unexpected but happy vision and in fact the name chosen for this town is Buonconvento, from latin “Bonus Conventus” that means happy, lucky place. Our farm Podere Salicotto is located just 3 kilometers from the village of Buonconvento. 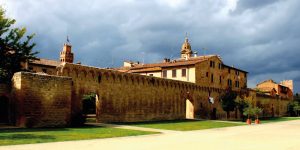 As the traveler of the Middle Ages would have done, even today you enter the historical center from the monumental Sienese gate and you dive into an atmosphere suspended in time. 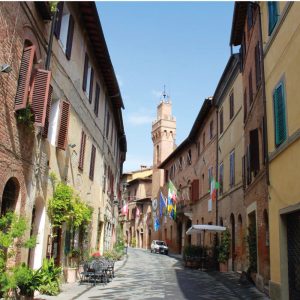 The opposite entrance, the Roman gate was destroyed during the Second World War.
Today Buonconvento still maintains its medieval structure. Its walls are the symbol of the village. Just a few steps to discover the true soul of Buonconvento: houses and buildings in stone and red bricks with windows and flowered balconies, arches and bikes leaning against the walls.
The heart of the historic center is Via Soccini, the main street where you find most of the restaurants, bars and shops, as well as the church, the Palazzo Comunale and the Sacred Art Museum.

As you enter the village from the Senese gate you will find the Church of Saints Patrons Peter and Paul on your left. The church was renovated in the eighteenth century and houses paintings by Matteo Di Giovanni and Pietro Orioli. Opposite the church is the Oratorio dell’Arciconfraternita della Misericordia, a 15th century building with cross vaults, walls decorated with black and white stripes and a ceiling decorated with stars. According to legend, Arrigo VII Emperor of the Holy Roman Empire, died here. After passing the church, on your left you will find the Museum of Sacred Art of Val d’Arbia.
Then you will find the Palazzo Comunale with the Civic Tower and the coats of arms of the ancient “podestà” who ruled Buonconvento. 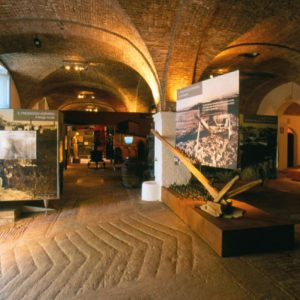 In Buonconvento you can visit two museums: the Val d’Arbia Museum of Sacred Art and the Mezzadria Museum. Both are in the village.

The Museum of Sacred Art of Val d’Arbia: It is located in Via Soccini and houses a collection of religious art from the twelfth to the seventeenth centuries all from the churches in the area. You can admire works by great artists such as Duccio di Buoninsegna and Pietro Lorenzetti, large canvases, goldsmith works, small icons and popular images kept in a suggestive gallery.

The Mezzadria Museum: It is located in Piazzale Garibaldi in the evocative seventeenth-century spaces of an ancient
barn. The museum shows the lifestyle of the peasants and shows, in a very evocative setting, a world that has now all but disappeared but that characterized these lands until the sixties. The exhibition includes archival documents, multimedia stations with talking characters and even the reconstruction of an old country house.

Th entry ticket to each Museums is € 3 but you can buy a combined ticket for both museums for € 5. For more information on museums, here is the contact number of Buonconvento Tourist Information Office: P.le Garibaldi 2 – Tel. +39 0577 809075 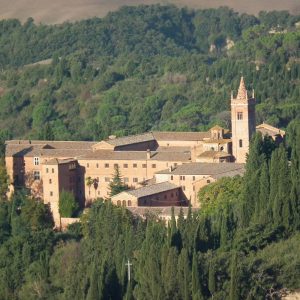 The surroundings of Buonconvento are rich in history, art and landscape. We suggest you visit the medieval grance (real farm-castles) such as Castelnuovo Tancredi, Bibbiano and Castelrosi.

Do not miss an excursion to the Abbey of Monte Oliveto Maggiore, in the Crete Senesi among Gregorian chants and wines produced by the Benedictine monks. Just 9 kilometers towards Asciano. –> Read more

Alternatively, going south for about 15 km you arrive at the fortified village of San Quirico d’Orcia and the beautiful landscapes of the Val d’Orcia.

Another alternative is to visit Montalcino, 13 kilometers away, where you can taste the famous Brunello wine or visit the splendid Abbey of Sant’Antimo. –> Read more

If you want to experience all of this, our Agriturismo Podere Salicotto is located just 3 kilometers from the village of Buonconvento and is the ideal base for visiting the Val d’Orcia and the Crete Senesi.